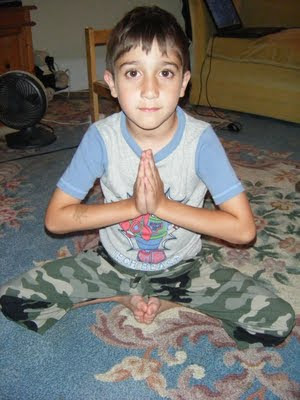 Today when I went to Barbara Benagh's yoga class at Down Under Yoga, Anthony was tagging along. A good friend of mine asked him if he was taking class too and he looked at me and said, "Yes!" He insisted on waiting for Barbara to see if it was OK for him to join in and when she gave him the OK, he settled onto a mat between Carolyn and I and there started his yoga journey.

It was a wonderful , blissful experience taking yoga with Antony and although the class was a deep, internally based class, he stuck it out and I could tell he felt so much.

No he may not go every time, but maybe he will...it is addicting and I know he enjoyed Barbara's teaching.

After class, he said to me that yoga was kind of like starting a church. If you felt you wanted to teach people about the type of yoga that you liked, that you could open your own studio and then people could come to you and you could tech them how to feel yoga the way you wanted them to feel it.

It was a very enlightening  and spiritual thing for him to say. He gets it!
Posted by Always Be Dancing at 4:58 PM