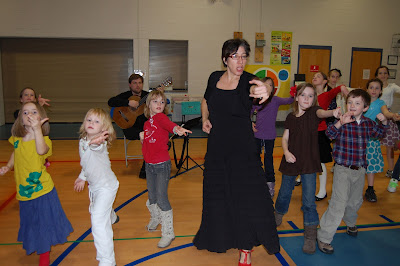 By Lisa Tetrault-Zhe
newsletter@seacoastonline.com
January 20, 2012 2:00 AM
KENSINGTON — Kensington Elementary School traveled to Spain without ever leaving town.
Students have spent the last week studying Spain as part of the annual passport program. The culmination of the program came Tuesday night, when students and parents took to the floor to learn the flamenco dance.
"The world is getting smaller," said parent volunteer Noreen Hall, who helped organize the event. "In Europe, the countries are closer together, but here in the U.S., we're more isolated. It's things like the cultural passport program that get us in touch with the rest of our world."
According to Principal Barbara Switzer, the program is in its ninth year.
"So far, we've visited Kenya, India, Jamaica, China, Russia, Korea, Ireland, Italy and now Spain," Switzer told the parents. "Aside from Kenya, we've had a student connection to all of those countries."


Two guests were on hand to participate and further develop the Spanish feel to the evening. Classical guitarist George Little of Amesbury, Mass., played a few Spanish pieces, while flamenco dancer Eve Agush of Natick, Mass., demonstrated and led the audience in a few dances.
"Flamenco dancing is so deep; it's a way of life," Agush said. "You have to take it with you everywhere you go. It's not like a pair of shoes that you can take on and off. I'm a girl from Brookline, Mass., but I have the fire."
She explained that flamenco dancing isn't just a dance, but also tells a story and is done in homes throughout Spain.
"There are four (parts) to the dance — first is meeting, second is courtship, third is the breakup and fourth is reuniting the couple," Agush said.
Grades 1 to 5, a total of 184 students, spent the past week learning about Spain in physical education (dancing and games); art (studying Spanish paintings); and library (reading about Spain). 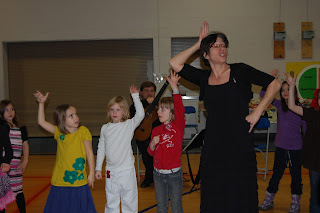 Two students agreed the best part of the week was the food.
"I really liked it," said Joseph Samuelson, a fourth-grade student. "We had Spanish rice, and also a dish with eggs and potatoes. It was delicious."
"The paella was wonderful," said fifth-grade student Lauren Sanderson.
Trying to adapt to the culture of Spain was an enjoyable challenge, according to Sanderson.
"Learning the language and the songs was interesting," Sanderson said. "Learning the dancing was the hardest part."


Physical education teacher Lili Spinosa, who spent the week teaching students Spanish games, said she enjoyed watching her students make the connection of the similarity to the two countries.
"I'm always amazed at how interested they are in the rest of the world, whether they're looking at the globe or learning a game," Spinosa said. "They see that the more we learn about other countries, the more we realize how alike we really are." 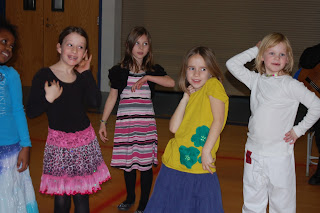 She explained the school invited a foreign exchange student from Spain, who's a sophomore at Exeter High School, to visit with students.
"Our students saw him and realized that they really can go anywhere," Spinosa said. "They're realizing that there is a whole lot more out in the world than just little Kensington, New Hampshire, which is the center of their world right now."
Information: www.alwaysbdancing.blogspot.com.

Posted by Always Be Dancing at 7:07 AM