Burlar: to deceive (but with a fun flair) 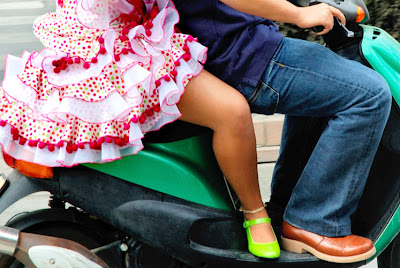 To dance Bulerias is to let it all hang out and to really get into the groove of flamenco. It is so guttural, like rap music...so heavy with a bass beat that it sends you into a flurry of movement and expression and feeling. You take the middle of the circle and you lay out what you got. The head spins, the 360's, the calls and rhythm. They walk hand in hand.

Teaching a Bulerias lesson today had me thinking about all that I know about Bulerias as a dance, a rhythm, a feeling.

What I realized is that a great analogy for the sound that your hands should make when clapping would be likening the two hands to be like a drum and a drum stick. The drum hand has to have a certain cupped shape (think of the skin stretched across a drum and make your hand be a good strong drum skin. Not rigid not loose. You need to work at it to find your sweet spots.to make sure that the drum stick hand makes the best sound when it strikes. I thoroughly believe that the sound that is needed for flamenco is not a sound that ends when the two hands meet, but instead is made when the two hands separate, giving more resonance to the clap and then you can play with the spaces between the claps. The quieter tones cause the hands to be closer together, causing the bellows created between the hands to have a a short puff of air, but for the stronger accents, the hands separate farther and when coming together more air is pressed between the hands causing a hiccup in time and a clap with more accent is then created. This hiccup I liken to the motor of a Harley Davidson which has a patent for the sound it makes. In a Harley's engine, the two cylinders sit at a 45 degree angle with a single pin crankshaft and that gives you the "put" "put" "pause" sound like "potato" "potato" (or "patata" "patata" in Spanish)**


**For those of you who really want to understand this, I have a fully description of the Harley engine below.

**"The classic Harley-Davidson engines are two-cylinder, V-twin engines with the pistons mounted in a 45° "V". The crankshaft has a single pin, and both pistons are connected to this pin through their connecting rods.[6] The design causes the cylinders to fire at uneven intervals. This is an engineering trade off to create a large, high-torque engine in a small space. This design choice is entirely vestigial from an engineering standpoint, but has been sustained because of the strong connection between the distinctive sound and the Harley-Davidson brand. This design, which is covered under several United States patents, gives the Harley-Davidson V-twin its unique choppy "potato-potato" sound. To simplify the engine and reduce costs, the V-twin ignition was designed to operate with a single set of points and no distributor. This is known as a dual fire ignition system, causing both spark plugs to fire regardless of which cylinder was on its compression stroke, with the other spark plug firing on its cylinder's exhaust stroke, effectively "wasting a spark". The exhaust note is basically a throaty growling sound with some popping. The 45° design of the engine thus creates a plug firing sequencing as such: The first cylinder fires, the second (rear) cylinder fires 315° later, then there is a 405° gap until the first cylinder fires again, giving the engine its unique sound.[75]
Posted by Always Be Dancing at 1:18 PM